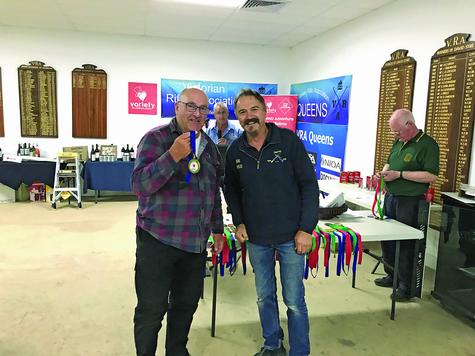 There were very generous sponsors of high value items for auction, and the outcome for the charity was far from trivial with nearly $10,000 raised. Sister club Nagambie’s president, Craig Weaire devised an innovative strategy to collaborate and pool the electronic target resources of the district associations to support the event. ECDRA’s electronic targets stood proudly beside those of regional clubs Nagambie, Katandra, Karramomus, and Glenrowan, allowing all entry fees to be directed to the charity.

As we have come to expect, ECDRA’s president, Terry Gee, again took a place on the podium in the prestigious F Open class, albeit on the number three step on this occasion. Full bore rifle competition always has an element of luck associated with success, because the wind conditions associated with the draw for the shoot time can make perfect scores tough. Terry works very hard at the sport and is lucky more than most as a consequence.

Neal started the competition by shooting a near perfect score ahead of all comers of 60.9, that is, all 10 scoring shots bar one being within a circle of 61mm in diameter at 500 yards distance.

At the formal dinner after the event, Neal reflected on the cruel nature of the scoring system for full bore shooting, where the decimal number of the score, Neal shot 235.27 so that decimal number corresponding to perfectly centred shots is 27, is used to break tied scores only. So, Neal’s 27 perfect shots, way ahead of all comers on the day, proved top shooting, top equipment, and absolute precision in ammunition preparation. Unfortunately, that counts for nothing to the podium place if a poorly timed gust, or a momentary lapse, drops a point. Neal is getting luckier, the harder he works at this skill.

Visit the website ecdra.com.au for more information about the club and the sport. Use the links to explore shooting competition on Saturdays, and practice and development on Wednesday mornings.