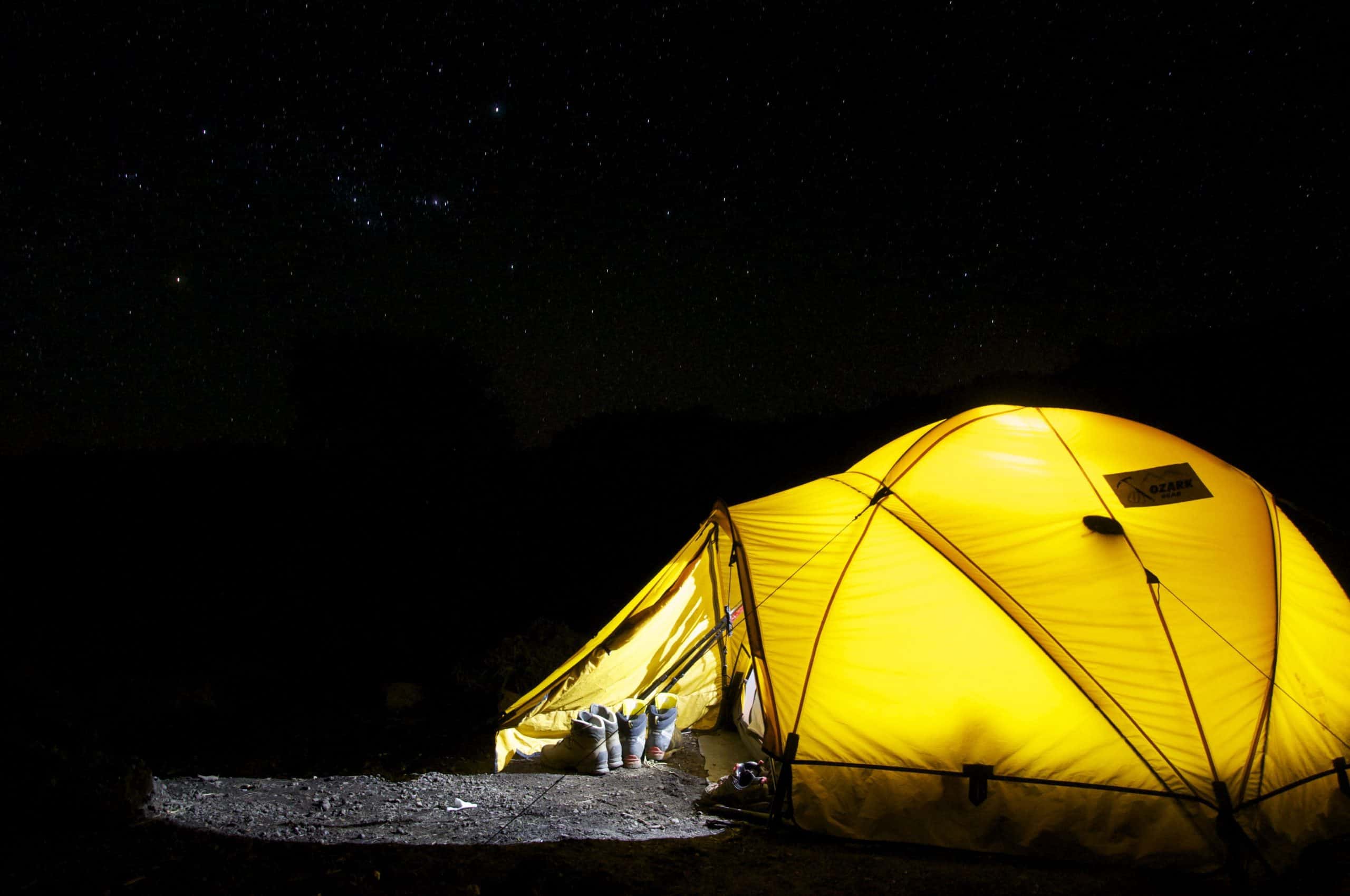 ALAN, a local farmer in Murrindindi Shire, has had a number of very challenging incidents with campers on his farm, before the licensed Crown Land camping laws have even been tested. He chose to use only his first name.

On the evening between two consecutive total fire ban days five years ago, Alan’s dogs started barking at about 2am. Alan looked out and saw that there was a fire on the other side the river, about six feet high. He went down with his fire tanker, starting the pump before he left. As soon as he got there, he jumped out and grabbed the hose, putting the fire out. Three people were cooking a midnight feast in frypans while drinking beer. The people were upset and Alan was forced to defend himself. He’d called the police before he went to put the fire out, and by the time the people had packed up and were heading out, the police were arriving and they were caught and charged. Actions such as this put the whole area at risk.

In another incident, about three years ago, a cow was calving down by the river. A group of people were standing 10 or 15 feet away from the cow. Alan said, “I told them to move back away from the beast, leave her alone and don’t go near her. I said I’ll be back in a few minutes. I’ll go around and check the other cattle. By the time I got back, maybe 15 minutes later, the cow was running up and down alongside the river. They’d jumped in their boat they’d come down the river on, and stolen the newborn calf. They were gone and the calf was gone.”

He’s also had an incident where a cow died from eating discarded fishing line. It tangled up in her gut and she died from septicaemia. He got the vet out to find out what was wrong. The vet opened the cow up and found the ball of fishing line.

About four years ago, Alan was away for a fortnight having a break. “People came down and camped at my place. Because there was rain, the paddock was wet. They got out doing wheelies in their four wheel drives, and tore up half the paddock. They ended up getting one of their vehicles bogged. They tried to pull it out with their own vehicles but couldn’t get it out. They came up to my shed and started up the tractor, an 80 horse power 4WD tractor. It had a drag chain on it. I’d been dragging logs around and they went down and pulled their vehicle out of the bog. Because they didn’t know how to turn the tractor off, they left it, but they stole my drag chain off the back of the tractor. $200 worth of drag chain. They left my tractor running there. I don’t know exactly when it happened. When I came back home, the tractor had run out of fuel, it had a full tank of fuel, 30 gallons of fuel in the fuel tank. It must have been idling there for nearly two weeks. I had to get the mechanic out because it had glazed the bore and was burning oil… It cost me $2500 to get it going again.”

He added, “What right have they got to come up here and use my tractor to get themselves out of the bog?”

In another incident, he had a blue heeler dog which was very protective of the farm. “He wasn’t aggressive but he’d bark at anyone at the river if they arrived at an ungodly hour. These blokes were flashing a spotlight around down there. He went down barking at them. They tried to get him away and he wouldn’t go, so they shot him. I heard the shot. I didn’t hear the barking but I heard the shot. I got up and saw the light heading back towards the bridge, and I jumped in the car and went down and intercepted them. I said, ‘Where’s my dog.’ They said, ‘Was that your dog. We shot the bloody thing. It was barking at us when we were spotlighting.’ I said, ‘Well that’s going to cost you, isn’t it.’ I called the police, and the police dealt with it then. I don’t know what happened to them.”

He continued, “I’ve had blokes down there at the bridge shooting their rifles and using fence posts as target practice and using high powered rifles shooting through 10 inch diameter yellow box posts. The shot went right through the post, it blew the back out of the post with the bullet going through, and cut the top wire of the fence with the bullet.”

He added, “If they’re doing it [shooting] at night, they don’t know what’s up on the hill there. There might be cattle up there they’re shooting towards. If it deflected a bit more, the bullet might have been going through my house. With this law that they’re bringing in, they’re allowed to bring firearms.

He wondered, “Why would they want to come to my place and camp when there are caravan parks so close by that have got all the facilities?”

There are caravan parks at Acheron, Taggerty, Thornton, Eildon Back Road, Molesworth, Yea and Snobs Creek Road, as well as two in Alexandra and two in Eildon. “There’s plenty of caravan parks around and they’re screaming out because the coronavirus has just about broken them because nobody’s been travelling. And they’re going to take more away from them. It’s just ludicrous,” he said, adding that most of the caravan parks are on rivers where they can go fishing.

If all of the Crown Land were to opened up for camping, Alan’s main concern is who will be monitoring it. With limited police numbers in the area, if there were to be a road accident, all of the police would be involved. If something happens with Crown Land campers, “Where are you going to get the police from?” he said.

“Who do I ring if somebody camps on an easement down here next door to me and it’s not a designated camping place? They’re only allowed to camp in certain places. Who’s going to regulate it? You ring up the police, they’re all busy. The council won’t send anybody out at two o’clock in the morning. They haven’t got a legal right anyway. You can’t get anybody from Goulburn Murray Water or the Fisheries Department of any department like that after hours. Who do you contact to police it?” he said.

He added, “If there’s an accident and there’s no access to where they’re camped, how do you get the ambulance in there or the police in there or something like that, to get them out if there’s been an accident.”

It seems that the policing might be left to the farmers, “But am I going to go down there and tell them to stop shooting?” he said. “If I take a shotgun down there and threaten them with a shotgun, are they going to call the police and I’m the one that gets charged?”

He added that he could also get shot if he went down there.

“The whole thing is so ridiculous. Fishermen have been coming along here, fishing on the river, no worries at all. I don’t blame them at all. They’re legally allowed to go along, as long as they don’t leave their rubbish behind. That’s the other thing. Who’s going to clean up the rubbish when they [the campers] go home? They might carry their beer and their food and all their camping gear 300 metres in along the river to set up camp, but they break a deck chair or tear a tent or something like that, and all their beer cans, they won’t carry them back out again. All their food wrapping and disposable stuff like that. They won’t carry it out and take it home with them. It’s all left behind. They do it now.”

As a fisherman himself, he always goes to speak to the farmer to see if it’s alright for him to camp there. It’s a courtesy. Most say that he’s the only person who’s ever asked.

“The biggest problem I can see about it, apart from the things I’ve brought up, is that they’re not going to have a toilet. They’re allowed to urinate within 20 metres of the river, but to defecate they have to go 50 metres from the water’s edge. They’re now 30 metres into my property. They wouldn’t like it if I went down to Melbourne and couldn’t find a public toilet and used their front lawn. It’s just that my front lawn is a bit bigger than their front lawn,” he said. “I don’t want to see somebody’s shiny backside poking at me in the middle of the day either.”

Insurance is another issue. The farmers are expected to take out insurance in case something happens with campers on the farm. Alan enquired about insuring his property against damage from fishers or campers, and was quoted $30,000 per year. “I can’t afford that,” he said.

He hasn’t found out what happens regarding public liability insurance for the campers if they are injured on the farm, including if they are trespassing.