Our history: Tragedy averted on the Goulburn River 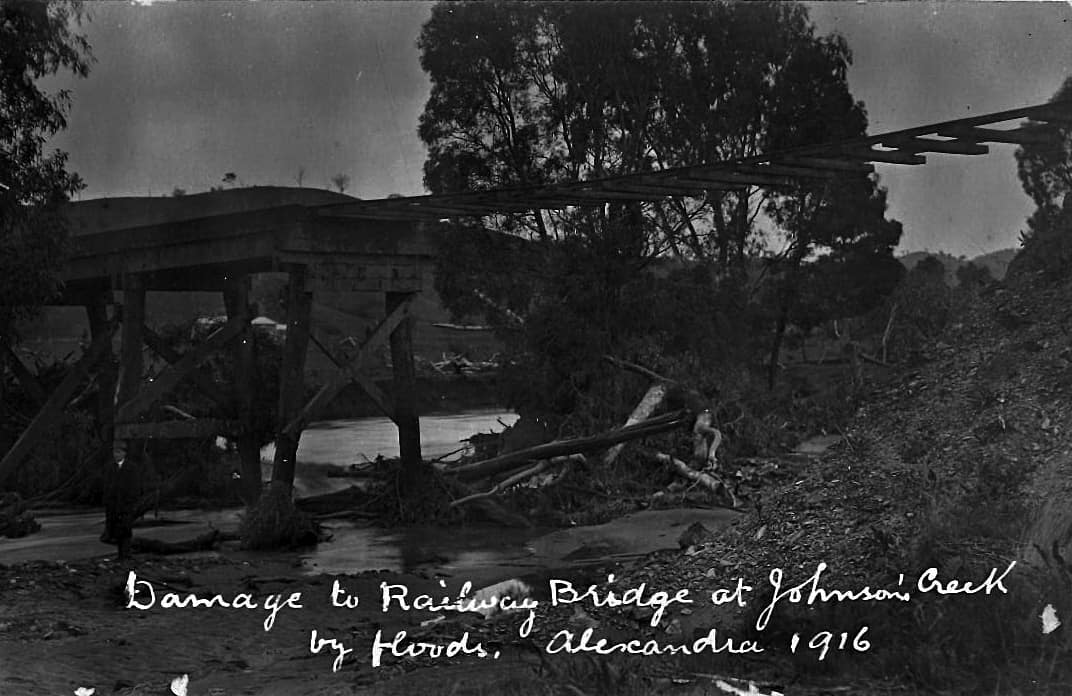 The following article was published in the Alexandra Standard on September 29, 1916

ONE joke on Sunday, for there are people who will jest sitting on their mother’s coffin, when crowds went down to Riversdale to see the flood, was: “The river had washed away in the flood and had left a sea,” for between four and five miles the water spread out from range to range.

The whole road from Riversdale Bridge to the foot of the Acheron Cutting was under water, even the fences being out of sight.

Messrs Macdonald, Mansfield and J Magee had the water if not in their houses, right up to the doors. The Messrs L and H Johnson, who now occupy Magee’s house, had an anxious time, the water rising within three inches of the floor of the verandah. A slip of land at the rear of the house caused some alarm and inconvenience. The engine house at the pumping station was inundated with three feet of water and some five cord of firewood was washed away; this is a serious loss to Mr P Orchard, the trust engine driver.

It was a singular coincidence that the Mesdames Johnson had arranged to open their tea gardens on the Saturday to visitors to the river, of which there are great numbers in the summer time. They certainly had a great opening for their venture and many who had gone to see the flood availed themselves of the opportunity.

The rush of water through the spans of the bridge was appalling, huge trees and logs being carried down as if they were mere twigs and at a rate of 40 or 60 miles an hour. Every time a log struck the wood work of the bridge it trembled from end to end as though it would collapse.

It would have been an awful catastrophe, as the bridge was crowded with sightseers all the afternoon, the road approaching being lined with motors, buggies, jinkers, waggonettes, etc.

In various directions, men were seen in boats rescuing sheep, horoes and cattle which had got marooned. In some places they had to milk cows standing in water.

To obtain a clear view of the extent of the flood one had to proceed to the Reservoir Hill, or climb the high peaks in the vicinity where the Thornton, Acheron and Ball’s Flatt could be seen. It was one immense sheet of water as far as the eye could reach, up and down the valley, and from four to five miles across.

A great deal of damage has been done to bridges, culverts, roads, fences, etc, but happily there has been no loss of life up to the present and comparatively few accounts of dead stock have come to hand.

Five sheep and a bullock, which had been drowned, were seen to pass under the Eildon Bridge.

On Monday, Mr Short had men, horses and drays at work and soon opened the U T Creek bridge to the public once again. The bridge at the Belle Vue has been closed, having received a shaking owing to the heavy lodgement of timber.

The greatest surprise of all is the manner in which the bridge on the ‘cork-screw’ road held, as it was under this structure the heavy timber passed.

Several land slips occurred, four prominent being two in the vicinity of Brooks’ Cutting, one near Mount Prospect and one at the Bald Hill.

One of the most serious losses sustained by the council is the destruction of the new concrete bridge at Upper Thornton which cost £1650 to erect. It was thought that the bridge would last for ages and would be able to resist any attack that could be made upon it. The weight against it when the logs, trees and debris gathered across the stream and piled up like the embankment of a dam, was so great that no structure could bear the pressure. It is estimated that the weight against the bridge was hundreds of thousands of tons. There was nothing for middle sections but to give way.

It was reported that Rennie’s Bridge had been swept away. This is not true.

People whose fences have been destroyed or whose land is under water are informed that the ranger has been directed not to be too stringent with their stray animals on the roads, but others turning animals out are warned that they will be dealt with as severely as the law will permit.

Much damage has been done to fences, bridges and culverts throughout the Yarck and Gobur districts. It will require hundreds of pounds to put things right. Taggerty reports that the flood is the biggest yet experienced. The workers at the saw mills in the Rubicon Ranges were unable proceed beyond the depot for several days. The Rubicon Tramway and Lumber Company has suffered heavy damage to their line and culverts, but the line will soon be in working order again.

On Saturday last, one of the greatest tragedies ever known in Alexandra was narrowly averted. It seems that Ganger Prendergast, when he saw the large quantity of water flowing down the Spring Creek, thought it desirable to make a special inspection of Johnson’s Creek railway bridge.

He instantly set off on his trolley and when he arrived at the bridge, saw signs of danger. He hurried into Alexandra and informed the station master. By the time an inspection party had reached the creek, 30 yards of the embankment had gone, leaving the rails and sleepers suspended in the air.

This was just before the train was due to leave for Melbourne. Had Prendergast come up an hour sooner there probably would have been no sign of the danger and he would naturally have returned home. The train would then have come rushing down to its destruction and the possible death of all on board.

There could have been no saving of it from disaster. The engine driver would not have been able to see what had happened to the embankment and the first intimation he would have got that anything was wrong would have been when his engine went plunging through the suspended rails into the gully below.

It is truly horrible to think of all that night have happened, and all who intended to travel by that train will no doubt be grateful to Ganger.