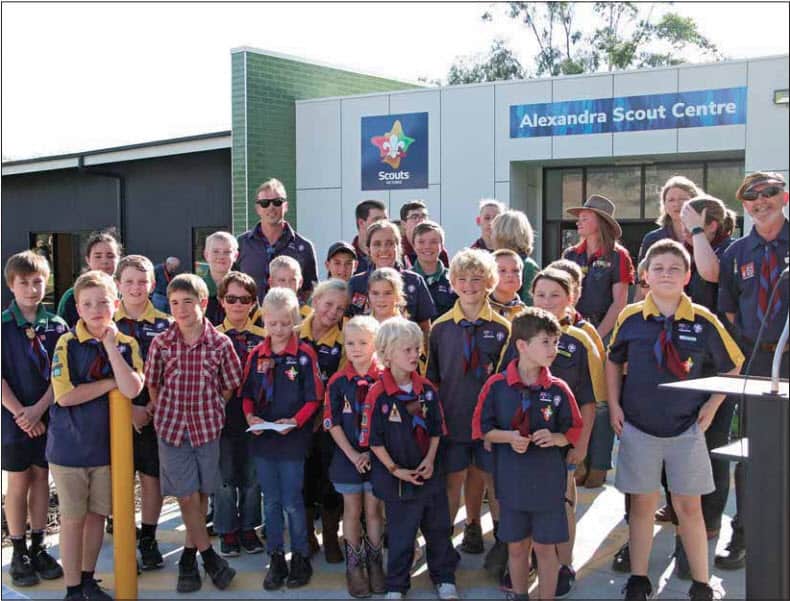 THE official opening of the new Alexandra Scout and Community Activity Centre was held on Saturday, May 8, under blue skies.

Scouts, parents, officials and local residents gathered for the event, held at the front of the hall. The scouts very ably conducted the service, with various members of the group invited to say a small piece.

The new hall features a multi-purpose facility with activity space, equipment storage, car parking, amenities, including a kitchen, toilets and showers, as well as offices and meeting rooms. The scouts currently have 59 members, who will certainly put the new centre to good use.

The centre is also available for use by the community when the scouts aren’t using it.

Nationals Senator for Victoria, Bridget McKenzie, an attendee at the event said, “This project provides several economic benefits. For starters, the project has supported 10 jobs during construction. The new Scout and Community Activity Centre will also support local businesses for the supply of goods and services, as well as attract more visitors to the area.

“Scouts and other clubs and organisations, and their facilities, contribute to the social fabric of communities which is especially important in our regions. They bring the town together through good times and the challenging.”

Deputy Prime Minister and Minister for Infrastructure, Transport and Regional Development Michael McCormack said in a press release that the community facility would provide long term benefits to the area.

Murrindindi Shire Council Mayor, Sandice McAulay commented on the hard work and dedication needed to complete the project, saying that “Young people are the future of our community.”

John Horne added that he was “Proud of all who have achieved this.”